very interesting post regarding women bringing in more money than their counterparts, namely men. Fox News contributor Erick Erickson says “When you look at biology — when you look at the natural world — the roles of a male and a female in society and in other animals, the male typically is the dominant role. Having Mom as primary breadwinner is bad for kids and bad for marriage.” i am in total disagreement with his statement and anyone else who feels the same way. what does it matter if the woman makes more than the man. the man in question has a real self confidence problem. even in same sex relationships, the person who is not making the most money in my opinion has a problem with themselves. if making more money is a issue with you then maybe u should make more or find someone who makes less than u.

END_OF_DOCUMENT_TOKEN_TO_BE_REPLACED 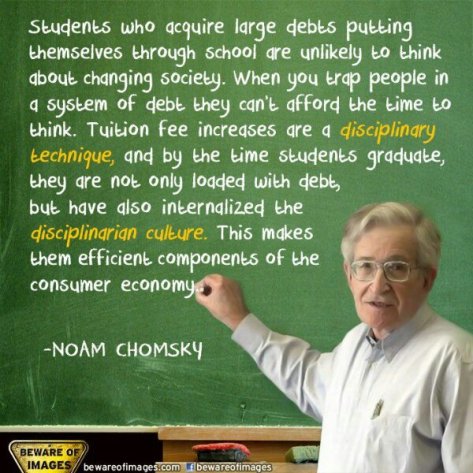 Only in America do they set u up for failure and still try to sell u the good ole’ american dream…my momma didn’t raise no fool….I truly want to know if somehow I can get some civil suit started against the department of education for teaching me and everyone else the wrong shit….not giving the right tools for survival in this country by our government is not fair to us….more people need start thinking for themselves and then they will be able to see more clearly. ….we as human beings have taken for granted our true abilities. ….I see clearly our potential and can’t wait when more human beings realize the same…believe me its a feeling for which words can’t begin to describe….government will do any and everything to keep those who don’t see clearly programmed predictable human beings…..TRULY WAKING UP IS A BEAUTIFUL THING….. FireSunLeo

THE ONE AND ONLY SUNLEO0778….WELCOME

"How pathetically scanty my self-knowledge is compared with, say, my knowledge of my room. There is no such thing as observation of the inner world, as there is of the outer world" ~ Franz Kafka WELCOME 2 THE INNER WORLD OF~ ONE&ONLY SUNLEO0778

THE PERSONAL BLOG OF CRYSTAL FLEMING

Daily news and entertainment for African-Americans. Your one stop for all things Black America.

Finding my way back out of motherhood -- while mothering

The little things in beauty

Welcome!! This blog is all over the place but it's made with love. It's me, my computer and my love for makeup. So let's go on an avanture <3

The Truth You Always Knew
juggling For A Cure

Juggling For A Cure is a nonprofit company that synthesizes juggling with service and education.

about women who do amazing things

This site is all about ideas